At the apex of the Sun & Moon Series, the Pokémon TCG: Sun & Moon—Cosmic Eclipse expansion boosts the connection of Pokémon and Trainers, and it launches TAG TEAM combinations to new levels!

Keep track of your Pokémon TCG collection with the Pokémon TCG Card Dex app. Available at no cost for iPhone, iPad, and Android devices, this app lets you browse cards from every expansion in the Pokémon TCG: Sun & Moon Series. And by using your device's camera, you can scan and keep track of which cards are in your collection—right inside the app.

If you want to defeat your opponents, you'll need a worthy deck. With the power of TAG TEAM Pokémon-GX on your side, you'll have a much better chance at victory. Check out this sample deck to see the power contained within Sun & Moon—Cosmic Eclipse. Give it a try! 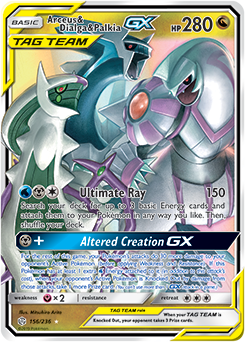 One of the most exciting cards in the Pokémon TCG: Sun & Moon—Cosmic Eclipse expansion is the TAG TEAM trio of Arceus & Dialga & Palkia-GX. Not only is it amazing to see these three mighty Legendary (and Mythical) Pokémon come together on one card, but the power they bring to your deck will have your opponents trembling in fear.

The most important tactic with this deck is to get Arceus & Dialga & Palkia-GX as your Active Pokémon as soon as possible and quickly use its Altered Creation-GX attack. This sets up a lasting effect that makes all your Pokémon's attacks do 30 more damage to your opponent’s Active Pokémon for the rest of the game. If you wait to use this GX attack until after you attach a Water Energy to this TAG TEAM trio, you'll get a bonus effect—an extra Prize card when you get a Knock Out with those boosted attacks!

After that, use Arceus & Dialga & Palkia-GX’s Ultimate Ray attack to do big damage and get 3 Energy from your deck onto your Pokémon. You can use Quagsire’s Wash Out Ability to move around any Water Energy, and its Hydro Pump attack can do big spurts of damage once you get enough Energy onto it. Naganadel’s Charging Up Ability lets you recover any basic Energy cards you might have lost along the way.

If you need some backup attackers, Volcanion , Mewtwo & Mew-GX, and Blastoise & Piplup-GX can all make a splash in different situations.

Check out all the amazing collections where you can find Pokémon TCG: Sun & Moon—Cosmic Eclipse booster packs and cards. 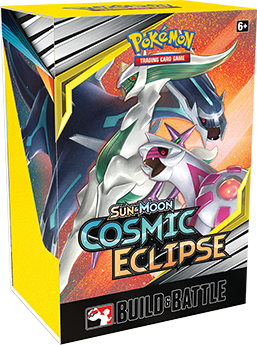 The Pokémon TCG: Sun & Moon—Cosmic Eclipse Build & Battle Box is an awesome way to get right into the action! Each Build & Battle Box contains a 23-card Evolution pack featuring key cards from current and prior sets, including 1 of 4 alternate-art promo cards. It also has 4 Pokémon TCG: Sun & Moon—Cosmic Eclipse booster packs and a deck-building tip sheet!

The Legendary Groudon is ready to smash foes, with Garchomp at its side! Use Seismitoad’s Bulldoze Ability for power searches, and call on Lady for extra Energy and Throh for big attacks. Strike from above with the Towering Heights theme deck!

Call the swirling waves with Kyogre, a Legendary Pokémon of the ocean. Use Empoleon’s powerful Recall to strike from the sea, and spin opponents around with Phione’s Whirlpool Suction. Command the surf and roll on to victory with the Unseen Depths theme deck!

Check out all the amazing cards available in the Sun & Moon—Cosmic Eclipse expansion! Use the filter buttons to filter through over 230 new cards.

You are about to leave a site operated by The Pokémon Company International, Inc.